We Nordics are infamously porridge people. We love it in the morning, and we love it as a warming evening meal. We also love porridge all year round, and in this sense, the milk-based barley porridge is a delicious winter breakfast for your porridge rotation.

Historically barley porridge is the age-old precursor for the rice pudding we now enjoy throughout Christmas. Rice was an expensive and fancy product back in the day, and only after the World Wars has it come to be a Christmas table staple.

DISCLAIMER: This post includes affiliate links, meaning that I get a small commission if you choose to make a purchase through the given links. You can distinguish the curated commercial links with an * sign. Read full disclosure here.

What barley to choose – hulled barley or pearl barley?

You can cook barley porridge multiple ways. I like to cook it milk-based to add more richness and creaminess. Most often I choose goat’s milk or whole milk and cook the porridge in a heavy-bottomed pot.

For the porridge, you can use hulled barley, pot barley, or pearl barley. Hulled barley is wholegrain and only the outer shell is removed from the grain. Pearl barley, on the other hand, is polished and the outer husk and bran layers have been removed. Pot barley is less processed in comparison to pearl barley but not as chewy as hulled barley.

Depending on my pantry situation, I alternate between pearl barley and pot barley. Pearl barley is winner in my household because it’s a more versatile product for porridges, risottos, and bread doughs. I even pre-soak the pearl barley for the porridge to give it a lovely, super-soft texture.

Hulled barley-based porridge is equally delicious but has the firmest texture and takes about 15-20 minutes longer to cook. If going wholegrain is your choice, then slow cook with hulled barley. 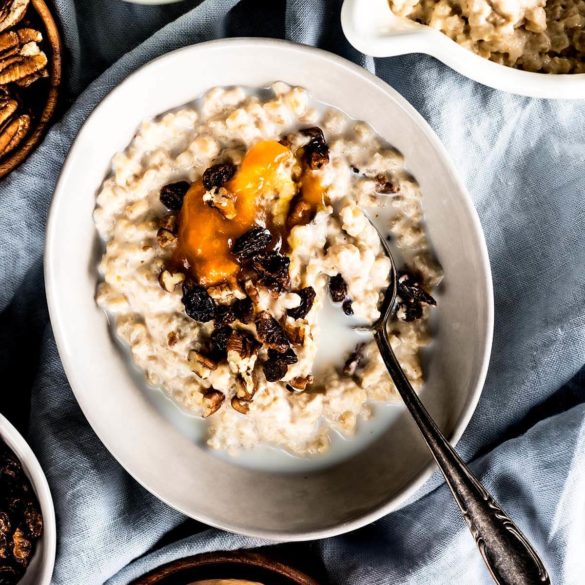 If using hulled or pot barley, make sure to soak the grains overnight. Use a heavy-bottomed pot to avoid burning the milk-based porridge. Pearl barley porridge is cooked in 40 minutes, hulled barley and pot barley-based porridges take longer 50-60 minutes.

Barley is one of the oldest cultivated grains (9000-10 000 BCE). Interestingly, despite barley’s ancient roots in the Middle East, it was modest enough grain to settle here in the North. Yet, it is not the most popular grain anymore, barley has a firm foot in the Nordic culinary heritage.

Often I feel barley is a forgotten grain that doesn’t get enough credit for its excellent qualities. Barley has a neutral and nutty flavor, a low glycemic index, and a good amount of fiber. It’s a wonderful base for porridge and amazing addition to bread doughs.

When comes to porridge, barley excels with its chewy texture. I like to garnish my barley porridge plate with nuts, seeds and dried berries to accentuate the meal’s texture even more. This truly is a nutritious start for the day on winter mornings.

When it comes to choosing the type of barley, you just have to experiment what kind of chewy texture you like best.

If you want to learn more ways to enjoy barley, why not try making rieska – barley flatbread from Lapland. It’s my heirloom recipe and I love to bake this flatbread especially during winter season.

Call of the Snowfields | COCKTAIL RECIPE