A new historical cookbook came across my way on one of my summery fleamarket rounds. The book is called Dining with Sibelius* and it presents a cultural overview of a 20th-century composer’s gourmand habits. It includes a multitude of recipes and if you’re a fan of Sibelius’ classic music, this book can give you ideas for a themed dinner party.

Imagine dining with one of the greatest symphonist of 20th century internationally. A man to whom Churchill sent cigars and who was given doctoral honors at Yale. I didn’t throw a dinner party but I cooked some mighty amount of borscht soup!

Disclaimer: this post includes affiliate links, meaning that I get a commission if you choose to make a purchase through the given links. Read full disclosure here.

My first memory of borscht soup is from my early twenties when my husband’s mother served it as a main dish in one of our family gatherings. Her side of the family comes from the East of Finland and over the years she and her mother introduced me to the sweet and sour magic of beets, cabbage pies and pickled mushrooms.

These ingredients and flavors are part of my husband’s roots and now they have grown to become stable of our own kitchen too. One of the traditions is to enjoy borsch at the end of the harvest season.

There are so many versions of this Ukrainian soup. Meaty version, the vegetarian version with beans, soup with potatoes, and without tomatoes. You name it, I’m sure google will find a recipe version for you.

My mother-in-law always cooked borscht with sausages and a lot of beets. Since grabbing Dining with Sibelius*, I have wanted to prepare it all the way from scratch on a relaxed day. And so I did.

This adapted recipe is a slow-cooked everyday soup with tender meat and spoonfuls of earthy quality comfort. The following recipe serves 10-12 people and the list shows the ingredients as in the book. To me, recipes are always a starting point so I only reflect the instructions in relation to how the soup came to be.

Borscht originates from Ukraine and the debate of globalization and glocalization is indeed an inherent part of food history and culture. The writers point this out and they’ve chosen to share a contextually named borsch recipe that takes us to the cauldrons of St. Petersburg and around these pots Ukrainians were supposedly called Little Russians back in the day. Originally, the recipe is found in the book* with the title Little-Russian borscht à la St. Petersburg.

I was interested in this recipe because it’s rather a meaty version (50 meat/ 50 veggies). I wanted to prepare the soup from my own homemade broth and this is how it came to be. Please see the ingredients in the printable recipe card and reflect the cooking process in text below. 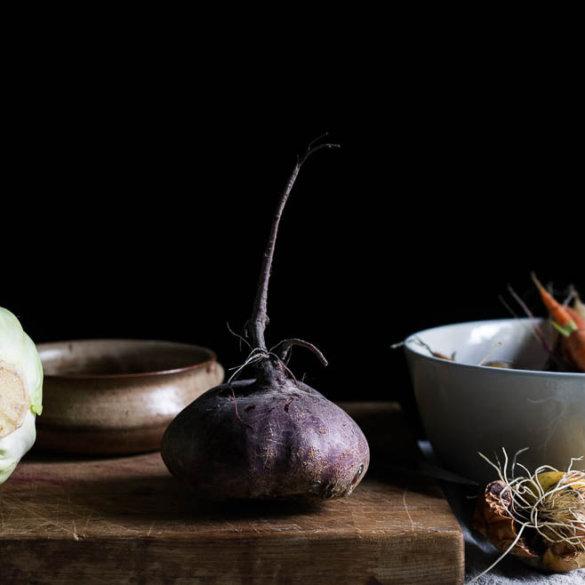 The cooking process | The broth

For the bouillon, I went hunting in the freezer. Last spring we bought meat from a local Charolais cattle owner and I had a beef knuckle waiting for me. Knuckle is great in stews so I thought why not also in borscht.

I cut the knuckle into three pieces and adjusted the amount of water to the meat weight. Slowly brought the pieces to boil from cold salted water, under a lid for about 30 minutes. Before adding the extras, I peeled the foam carefully from the surface.

Sauteeing the veggies on a dry skillet gave a bit color before I added them to the broth.

I gathered I let the broth simmer for three hours on a wooden stove until the meat pieces were tender and ready. Finally, I passed the broth through a strainer

Unlike in this recipe, I recommended preparing the broth a day in advance so that you can peel congealed fat from the fridge-cold broth. However, since knuckle is not the fattiest stew meat I did not feel the need to do this. All in all, it seems, I drew this meat bouillon from my own ways of boiling broths. Avoid allspice and roast the vegetables for stronger flavors.

The process | The Soup

Prepping all the vegetables (washed, scrubbed, peeled, sliced, shredded, and striped) helps you all the way. I sautéed the vegetables (carrots, celery, and parsnip) in a pot then adding a couple of spoonfuls of bouillon. I continued to cook in low heat as instructed.

When the vegetables were half done, the shredded cabbage joined the soup.  After a few minutes, I added the wheat flour thickening allowing the mix to boil on low heat.

When the vegetables were done, the rest of the broth went in followed by one allspice, a bay leaf, and tomato puree instead of tomatoes. At this stage, the ham bones are also mixed in. Since I did not have any, I continued without them and let the soup boil for an hour (no lid).

While waiting for the soup, I shredded the meat and the extra beetroot used for coloring in the end. I prepared the podraska (add 2 tbsp of cooking vinegar on top of grated beetroots and let them rest for 20 minutes).

I bought a piece of cold-smoked ham out of curiosity for this dish. You can either add the ham stripes to the soup or mix them with smetana, I went for the first option.

When the soup is ready, adding the meats 10 minutes before serving is recommended. The recipe instructions also mention adding separately boiled white beans at this stage but opted out because I figured there’s enough of protein already. I brought the soup to boil one more time as advised and lastly added the coloring podraska through a sieve.

To me, borscht represents a hearty meal that warms on a cold day when it’s wet and dark. It’s a perfect soup for the end of the harvest season when one can pick the fresh ingredients straight from the garden. These beets are homegrown.

I also love these kinds of relaxed days when slow-cooked food boils in the kitchen and the house feels like a big hug. All in all, it was a perfect time for this kind of soup making.

But this recipe really is a meaty version! 50-50! My husband loved it and called it a totally different dish from the borscht we are used to making. This is how much the texture and balance can vary from version to version.

On the other hand, it was a bit early season for this. I can imagine that I would prefer a heavier version like this during winter after skating or another type of outdoor fun. Yet the shredded beef is so much better than sausages. Yum! Luckily our household of two does not feast like a group of 10 men so I have half of the soup left in the freezer, waiting to be served later.

The flavors were on point but I felt there could be 0,5-1 liter more of the bouillon. Dipping delicious bread into the broth is half of the fun & this soup fell short on that notion.

Finally, the amount of podraska was not enough to achieve the kind of coloring and sourness that I prefer. I adjusted this by adding an extra bit of pickled beetroots to the soup.  Lastly, the cold-smoked ham did not have almost any effect in the mix. I reckon bacon would be a better choice.

Whether using meat or not (I generally don’t use meat, but use a meat stock), I find that roasting the beets produces the best results, as it intensifies the flavours and helps to fix the pigment. Also, the vegetables that go into the broth are sautéd first in a broad non-stick skillet, in which they get a healthy shot of vinegar when they’re about one-third cooked. These two steps seem to obviate the need for a podraska. I prefer this hot, when the whether is cold. I do a summer version, lighter broth (vegetable or chicken), using additional seasonal vegetables (spinach, asparagus), and a smaller volume of vegetables so the soup isn’t so dense, served chilled, garnished with sour cream, dill, and minced green onion. As you say, though, there are infinite variations. There has to be something seriously wrong with a borshch recipe for me to say that it’s actually bad.

As a side note, I don’t think any of my Russian or Baltic recipes call for allspice berries, but, being half-Finnish, I always add about a scant teaspoon of berries.

Great tips Steven, thank you for sharing! I do agree with the allspice, it’s a very addition to the recipe from the authors I think :D Now that we got first snow here in Finland and the weather is cold, I can’t wait to cook a big pot of borshch.