This malted and spiced rye bread is called limppu in Finnish. It is a soft festive loaf with a sweet aroma, bold spices, and a glazing syrup wash on top. Typically we Finns enjoy this loaf during Christmas time and Easter but I also think it makes a great sandwich bread and they’re available in grocery stores all year round.

Malted rye has many forms: cut, chopped, crushed, and milled. I count on the last two and they are commonly found methods to bake bread in Finnish cuisine.

Disclaimer: the post includes affiliate links, meaning that I get a commission if you choose to make a purchase through the given links The links are specified with a * sign. Read full disclosure here.

What is malted rye flour?

The malted rye flour has a full taste giving the bread beautiful dark or golden color plus adding sweet notes. Malted rye flour is milled from fermented whole grain. The rye grains are washed, soaked, sprouted, and then finally dried. The hotter the drying temperature is the darker the roasted taste of the malted rye.

Where to find malted rye flour?

Since the majority of malts are used for beer brewing, I would check the malt product selection of your local brewing store. No luck there? I would scout the supermarkets with good specialty selections and potentially ask bakeries for their recommendation.

If you want to bake with the very same malted rye product I’ve used here, check this label and globally delivering web store. The flour brand I used is called Laihian Mallas and it has also an English site here but unfortunately no an online store yet. (Disclaimer: I’m am in no association with either the mentioned malt brand or the store.) If you have a Finnish friend coming over, ask them to bring a bag of the malted rye flour. This product is commonly found in Finnish supermarkets.

If you can’t find malted rye flour anywhere, I got good news for you!

If unable to find malted rye flour, you can substitute it with malted barley. You can also make some yourself but you need to be patient and plan ahead. Vanessa Kimbell has a step-by-step guide to homemade malted flour in her book The Sourdough School: The Ground-Breaking Guide to Making Gut-Friendly Bread*. If you like to get in-depth with your bread baking, making everything yourself from scratch is also possible.

Ready to bake malted rye bread? I have loved the malted rye flour from Laihian Mallas for years and I wanted to adapt a recipe from the very backside of the package. It’s a relaxed recipe and does not differ much from other limppu recipes out there. The key is to focus on the syrup wash at the end of the oven bake.

The recipe yields two small loaves. The ingredients are scaled by 50 percent from the original recipe and instructions are from yours truly.

If you want your loaf to have an extra festive aroma, use some orange juice and a selection of spices. Taste the dough and adjust more spices to your liking.

These two loaves in the photos I baked for sandwiches. I had crushed fennel seeds and aniseed flavoring the milk-based dough. I also added handful of organic raisins which I soaked a little while before adding into the dough. When baking these, I was still battling with a small old oven here in the countryside which resulted a bit too din ark surface.

In the photos above, you see how the first set of syrup wash looks like. Wash both the top of the bread as well as the sides with the syrup. The surface should look wet when you transfer the loaves back into the oven. Sugar glazing is built during the second half of the baking, I usually washed 4-5 times.

Making limppu the with sourdough starter

What about using a sourdough starter? I’ve baked sourdough limppu twice but I was not perfectly happy with the crust which resulted in cracks. Limppu is supposed to be soft all the way and those past sourdough trials were too crispy despite the syrup wash. Back then I used a 20% starter in relation to the total flour and I had two oven-bake versions.

Sourdough experiments with this recipe continue, though. I will be sure to update and link the successful solution here when I find it. When testing this recipe with sourdough, keep in mind that this dough is sugary and fast. 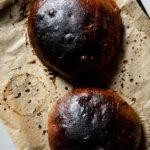 […] (Swedish molasses-based rye bread). Instead, I had breadcrumbs which included leftovers from malted rye bread and black sourdough. Hence the dark look! I used the last of my very bold and sweet oven apple […]

This site uses Akismet to reduce spam. Learn how your comment data is processed.