If you’re into Nordic food, you may have come across whipped lingonberry porridge over the years. It’s a classic Finnish treat loved by all ages usually enjoyed cold with milk.

But did you know that this pink porridge is also cooked with rye flour? If not, I warmly welcome you to discover this less known version of vispipuuro. The recipe was translated & adapted from Chef Maija Silvennoinen’s recipe book focused solely on rye, please find the link at the end of the post. It’s a fantastic book.

Disclaimer: This post includes affiliate links*, meaning that I get a commission if you choose to make a purchase through the given links. Read full disclosure here.

The more common version of whipped porridge is cooked with semolina. However, semolina is a bit mellow for my taste on this occasion. And to be honest, often times the pink porridge recipes I’ve found include too much sugar.

The difference in taste also comes down to cooking time. Semolina based lingonberry porridge takes max 30 minutes in total to cook before whipping. Rye flour-based porridge simmers slow and the porridge sits with the lid on for extra 30 minutes after removing it from the stove.

I recommend using dark rye instead of white rye. Choosing stone-milled wholegrain rye to get the best flavor and benefits. For example, Bob’s Red Mill Organic Dark Rye Flour, 20 Ounce (Pack of 4) is a great choice if you also enjoy using rye flour in bread baking.

Using rye flour instead of semolina does not affect the color that much. The rich red color of the porridge is thanks to using more berries than usually found in semolina recipes. In addition, I took the freedom to press the lingonberries through a sieve in oppose to just straining them off for juice.

Traditionally lingonberry porridge is whipped after cooling. But you can also enjoy it as is and eat it warm, too. I prefer the whipped porridge now and always. Rye based whipped porridge does not build as airy in volume as semolina based version but it is still fluffy. 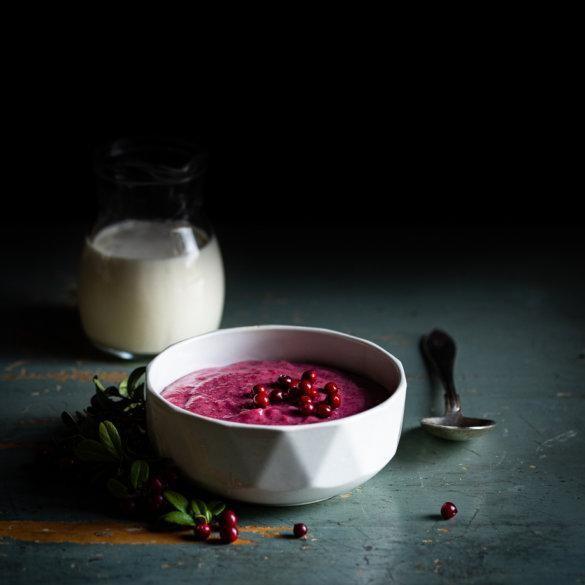 Measure water, sugar, and lingonberries. Bring the mix to boil in a medium-sized pot. Slowly cook the berries for 10 minutes. With a fine sieve,  strain off the lingonberries and transfer the juice back to the stove.

Beat rye flour into the hot juice with a whisk (to avoid clumps, add into a small amount of liquid first, then alternate adding rest of the flour and juice. Don't forget to add salt. Simmer on low heat for 30 minutes giving the porridge a stir occasionally. Set the porridge aside leaving the lid on for another 30 minutes. Finally,  take the lid off and leave the porridge cool.

Whisk the porridge with a hand mixer or in a stand mixer. Porridge is served with milk or cream.

*After straining the lingonberries, I then pushed the berries with a spoon through the sieve for extra flavor and color only leaving the skins out. *I cooked my porridge on a wood fired stove and potentially it was too hot as my porridge ended up being a bit too dense in the end of the cooking. I added more water and after the off stove simmer time the texture was normal. *I whipped the porridge and served it cold with cream instead of milk.

When I was a kid

I absolutely adored whipped lingonberry porridge already as a kid. My mother would cook and whisk a big pot of porridge. Vispipuuro was served in a huge glass bowl so that the pink color mesmerized everyone.

The serving bowl was not crystal but a very fancy dish nevertheless. The whipped porridge sat on the kitchen corner table and everyone sneaked on for afternoon and evening snacks. Usually, the porridge was gone within a day or two. Rarely there was any left to store in the fridge.

This is a very inspiring rye-focused recipe book. There was also a rye version for cinnamon S cookies which I traditionally bake a couple of times a year. I think I might explore that next!

Finnish Blueberry Rooster | The Dessert that feels like a warm hug